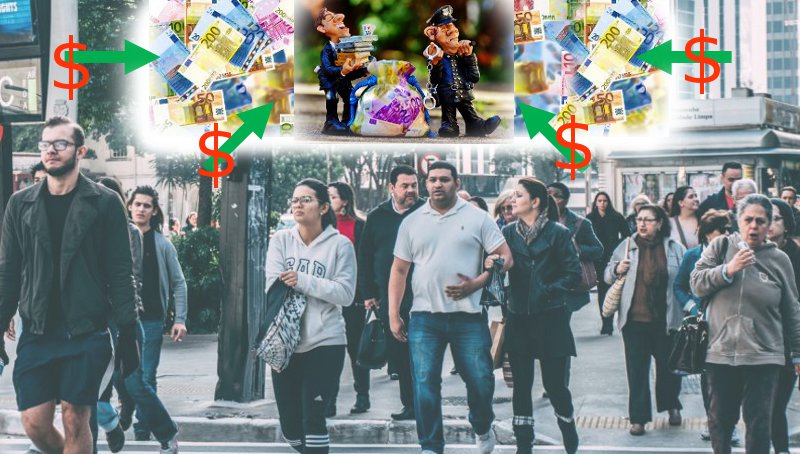 A definition serves merely as a starting point for a logical exploration of related ideas. However – and necessarily – the direction which the exploration takes depends on the definition. In any discussion of ideas, a  conscious effort is needed to understand how it is influenced by the definitions of its basic terms.

Furthermore, by questioning the basic definitions underlying a discussion – and trying out alternative definitions – one is able to explore a broader range of ideas, to think ‘out of the box’.

That common-sense maxim can be applied to the concept of ‘wealth’.

It turns out that the original definition of ‘wealth’, a few hundred years ago, was NOT D1. Originally, in Old English, the word ‘wealth’ was related to ‘well-being’, via the word ‘weal’. ‘Wealth’ meant, quite simply, ‘that which brought well-being’. Let us call this simpler definition D2.

No doubt assets such as homes, cars, buildings et cetera – as listed above – can contribute to well-being. But then so do health, education, talent, culture, music, happy families et cetera. Thus it is clear that D2 is a far broader definition of ‘wealth’ than D1.

Some of the most priceless aspects of life – health, education, talent, culture, music, happy families … and more – are excluded from definition D1, but they would be included naturally in the more holistic definition D2. A few hundred years of material progress has squeezed the life out of our understanding of ‘wealth’!

An example: Say a penthouse of market value twenty million dollars is lying mostly vacant, only being occupied by its owner for a few weeks in a year. The value of this asset, according to definition D1, is of course twenty million dollars. However, by the criterion D2, this asset does not have much value, since – in terms of bringing well-being to individuals – this asset is not contributing much.

Another example: A highly skilled baker is in good health and has a happy family. By definition D1, he may not be well off; but by definition D2, he may be better off than a mega-millionaire.

It is clear that the economists’ definition of ‘wealth’ is missing out on certain priceless aspects of life – indeed those which make life worth living. Is it any wonder then that more and more people are finding life to be unbearable under the de facto regime of the economists?

Indeed, the following deadly con game based on so-called ‘aggregate wealth’ kicks in, robbing individuals of their very basic, human autonomy: It doesn’t matter whether you think you are well off, because we have got gigabytes of data to prove that you must be well off.

For the subsequent discussion, we shall take the original and the more sensible definition of ‘wealth’, which was denoted by D2 above.

Essentially due to the bounties of Mother Nature, in a hard-working society surplus wealth does accumulate over time. In a healthy, united society, the most natural policy should be to utilize the surplus wealth to ensure future well-being of the society. Indeed, even for economists, this should be a no-brainer.

Of course details of what is considered ‘surplus’ may vary from society to society – but it is fair to assume that in every society there is some implied understanding of ‘basic needs’. Then ‘surplus’ is defined as that which would be left over after everyone’s ‘basic needs’ are satisfied.

The surplus wealth should be put to good use by the society; otherwise, by the inexorable principle of ‘use it or lose it’, the surplus wealth will erode over time. This is basic economics.

In a healthy, united society, ‘self-governance’ would ensure that the surplus wealth is put to good use – towards health, education, infrastructure, the environment, and so on – so that the well-being of the society is ensured, at least for the foreseeable future.

Ideally, ‘self-governance’ of the society would be based on voluntary contributions by all its members, because everyone would be concerned about the society’s future well-being.

But things go horribly wrong when a section of society – based on some self-proclaimed criterion – begin to consider themselves ‘apart’, or ‘elite’, or ‘higher’ – or any other such nonsense. Basically, the group is creating a pretext to claim a higher share of the surplus wealth. Any pretext will do.

Once the society is thus divided, problems begin to multiply very rapidly.

Surplus wealth, which should work for furthering the well-being of the whole society, becomes the object of private greed and rapacity. At that point, contributions to the society’s future well-being are made ‘mandatory’, and viewed by people as ‘coercive tax burden’.

Thereafter, the divided society must cope with two HUGE issues: (1) whether people will pay their fair share of the tax, and (2) whether the collected taxes will ensure the society’s future well-being.

The point to be noted is that the root cause of the problem is disunity within the society.

Sadly, the path then becomes clear for the powerful to avoid paying taxes and view the society as their fiefdom. After all, they have the most influence over legal and legislative processes.

In this world nothing can be said to be certain, except death and taxes. – Benjamin Franklin

More recently, ‘masters of finance’ have added a third component to that deadly duo – namely, debt.

Theory: A loan should contribute to an individual’s or a company’s economic well-being. How? Simple: By putting the loan amount to work, the individual or company earns more than the principal and interest payable thereon, repays the loan – and thus comes out ahead.

However, the biggest of the debt-based financial scams is the following:

Speculators bet ‘long’ or ‘short’ – and they are least concerned with the well-being of any society. So, incredibly, the planet’s future is in the hands of those who have no real stake in any society!

In fact speculators calculate that ordinary tax-payers can always be politically arm-twisted to pay up, or to sell off public assets at a discount. Paid-off leaders are easily procured to approve their plans.

All such cases of deception, exploitation and legalized robbing are touted as ‘the working of free markets’. Indeed, today the phrase ‘free market’ is no more than deceptive PR for the people sucking up the world’s wealth like there was no tomorrow.

There is a HUGE basic difference between taxes and debt. Taxes are legal obligations to the society; once the due amount is paid, it cannot be claimed back. Debt extended to a government creates a financial and political asset for the creditor, and a long-term liability for the debtor.

Taxes are paid by citizens; debt is an instrument of speculators.

By pushing hard for lower tax rates, speculators push governments to rely more and more on debt. But over-reliance on debt makes it much harder for societies to attain true welfare of its members. The profitable debt-based business model of the global uber-rich is designed to rob societies of their wealth.

The quaint term ‘capitalism’ is no longer apt for the conditions prevailing today, since debt has replaced real capital as the engine of the alleged economic well-being. ‘Financialization’ – or perhaps ‘debitization’ – is a better description. Toxic financialized economics tears societies apart; the best and the brightest learn only to suck life out of communities. And yet, believe it or not, ‘mainstream economists’ do not tell us all this!

The end-goal of the uber-rich is to ‘own’ the world, to enjoy the highest degree of material comforts and security possible, while not being committed to any single society or community on the planet. In fact this compulsion of the uber-rich is driving the geo-politics of globalization.

Much of history is driven by delusion.

Related links: response to a bank chairman, a brief history of debt.

One thought on “Taxes or Debt?”